The television show Trailer Park Boys ("TPB") is one of my guilty pleasures. For those of you who have never seen an episode, check it out on Netflix or hunt down some DVDs. Although the vulgar language, constant drug references and semi-offensive plot lines might not be your cup of tea, following the ridiculous misadventures of Julian, Ricky and Bubbles as they scheme to get rich while trying to stay out of jail is always good for a laugh. Having watched all ten seasons of TPB, here are some of the financial lessons I have learned from the three main characters: Julian, Ricky and Bubbles. 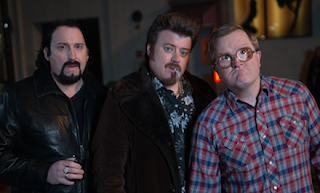 Julian: Dream big, develop a plan and lead others to accomplish your goals

Without a doubt, Julian is the brains of the TPB gang. In season 2, Julian outlines his "Freedom 35" dream which he hopes to accomplish by selling drugs to prison guards. Ricky and Bubbles are quickly recruited to help Julian achieve his plan when he convinces them to buy into his "Freedom 35" vision. Even though season 2 ends up with the gang in jail, this doesn't stop Julian from continuing to shoot for the stars. He becomes part owner of the Sunnyvale trailer park where the TPB gang lives, he opens his own (illegal) bar, he renovates a hotel, and even successfully markets Sunnyvale as an all-inclusive (drug) vacation destination. Regardless of  the multiple trips to jail and failed plans, Julian never stops dreaming big, and is shooting for "Freedom 45" at the start of season 10.

Ricky: Take action, focus on your strengths and don't care what others think of you

Although Ricky is NOT the brains of the TPB gang, he is a man of action who is not afraid to get his hands dirty. From being a janitor at a high school, to sleeping in a barn, to pulling safes out of walls with his bare hands, Ricky never hesitates to take action when it is needed. Often, when he is desperate for money, Ricky reverts back to focusing on his strength, which happens to be growing and producing high quality drugs. Ricky takes pleasure in his mastery of pharmaceuticals, even going so far as to pay expenses with hash coins in season 8. Another of Ricky's admirable qualities is his complete lack of regard for caring what others think of him. Forget keeping up with the Jonses, Ricky drives a beat down car with no doors, wears track pants everywhere, and often butchers common sayings by turning them into Rickyisms (i.e. "Can you give me a bit of credjudice?", "Crop of shit", "Don't judge a cover of a book by its look", etc.).

Bubbles: Hustle, be your own boss, and support your friends

Although his appearance might indicate otherwise, Bubbles is a full blown hustler! His side hustles have included re-selling shopping carts, the Kittyland cat daycare, a short-lived restaurant, and even manufacturing honey oil. The constant presence of Bubbles' side hustles indicates that he prefers to be his own boss instead of letting Julian and Ricky dictate his actions. Given Julian & Ricky's money making ideas usually involve illegal activities, Bubbles' entrepreneurism cuts down the risk of his landing back behind bars.  Despite venturing out on his own, it's fair to say to Bubbles always supports his friends. Be it serving as a lender of last resort, providing entertainment with his guitar at Julian's bar, or publicizing the all-inclusive (drug) vacation destination that is Sunnyvale trailer park via the Internet, Bubbles is always there for his buddies.


Although none of the TPB gang have achieved financial independence, they have been extremely close multiple times due to the traits outlined above. More important than being independently wealthy is enjoying the journey, which Julian, Ricky, and Bubbles have mastered.

What is your guilty pleasure and what makes it great???